04 July 2022 - If a dairy farm converts its production from conventional to organic, it can reduce its climate footprint by up to nine percent. This is shown in a new study led by the Martin Luther University Halle-Wittenberg (MLU) and the Leibniz Institute of Agricultural Development in Transition Economies (IAMO), for which a dairy farm was monitored for two years during this process. Despite the extra effort, yields also remained at a high level, as the team writes in the journal "Agronomy for Sustainable Development".

"Our study shows that there does not have to be a contradiction between environmentally friendly production and maintaining the productivity of a farm," says Arthur Groß from the Institute of Agricultural and Food Sciences at MLU. The team studied the Pfaffendorf dairy farm north of Halle, which converted its production from conventional to organic in 2018. With an arable area of about 675 hectares and more than 650 cows, the organic farm is one of the largest in the region, says Groß.

During the conversion, for example, the feed for the cows was changed: Instead of feed concentrates, in future there should be more reliance on regionally grown crops, straw and grass. "Concentrated feed is relatively energy-intensive and is produced far from the farm. Regional feed production, on the other hand, is much more resource-efficient and environmentally friendly, as external deliveries are eliminated and less fertiliser is used," says Groß. In addition, the farmers decided to replace the mineral fertiliser prohibited in organic production exclusively with the farm's own liquid manure and not to buy any other organic fertiliser externally.

Before and during the conversion, the researchers carried out a so-called "carbon footprint" analysis based on international standards in order to determine a holistic carbon footprint for the farm. For this purpose, they collected all available farm data. This includes, for example, information on the crops grown, the use of fertiliser, the size of the farm or the feed for the cows. The fuel consumption of the vehicles used were also taken into account for the calculation and whether certain products have to be purchased and delivered. "All of this is relevant to accurately model the carbon footprint of a farm," says Dr Florian Schierhorn from IAMO. The team then calculated the emissions per litre of milk produced.

The most important result: the conversion reduced greenhouse gas emissions per litre by nine percent. However, not all areas of the farm benefited equally from the change: while the emissions from fertiliser and animal feed dropped significantly, the methane emissions of the animals increased, as the higher fibre content of the organic feed stimulates digestion. In addition, the milk yield of the cows decreased due to the abandonment of concentrated feed. "However, the drop in yields remained below expectations, and the production level could be maintained relatively well," Schierhorn explains. Overall, the positive consequences outweighed the negative ones, so that emissions per litre fell significantly during the conversion.

The results of the researchers from Halle are in line with surveys in similarly intensive production regions, for example in Europe and North America, which calculated the carbon footprint of organic farms. The team of authors assumes that the results can be transferred to many similarly structured farms in Germany. "The German government has the goal of expanding organic farming to an area share of 30 percent. Our study provides climate policy and economic arguments for this," concludes Schierhorn.

Groß, Arthur; Bromm, Tobias; Polifka, Steven; Schierhorn, Florian (2022) The carbon footprint of milk during the conversion from conventional to organic production on a dairy farm in central Germany. Agronomy for Sustainable Development 42 (3) 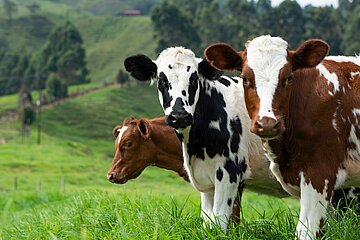