The research, which is published in Environmental Research Letters - “Effects of institutional changes on land use: agricultural land abandonment during the transition from state-command to market-driven economies in post-Soviet Eastern Europe"- was lead by IAMO scientist Dr. Alexander V. Prishchepov and co-authored with his colleagues from IAMO, the University of Wisconsin-Madison and the Humboldt University in Berlin. The project analyses the effects of the change of institutions that should regulate agricultural land use after the collapse of socialism on agricultural land abandonment rates and patterns in Poland, Belarus, Latvia, Lithuania, and European Russia between 1990 and 2000. Each of these countries followed a distinct approach towards institutional reform in the postsocialist transition, which was determined by politico-economic considerations, socialist-era land property rights, and the existing agricultural structures. The study demonstrates how the different combinations of institutional changes led to starkly varying agricultural land abandonment rates within similar agro-ecological conditions.

The highest rates of agricultural abandonment were found in regions where institutions that regulated land use had started, but no yet fully completed the reform process by the end of the first decade of transition. The highest rates were found in the Baltic States (43% of agricultural land was abandoned in Latvia and 29% in Lithuania), where land was restituted to historical owners, but land markets were not yet functional and rapid economic developments resulted in a reduced importance of agriculture in relation to other economic sectors. In Russia, 31% of agricultural land was left unused in the first ten years of post-socialism, due to a 90% reduction in State support for agriculture while the Russian land reform maintained the socialist farming structures and a moratorium on land sales, which was only rescinded in 2003. Inversely, lowest abandonment rates were found in those countries where institutions that regulated land use were strong during the transition. For instance, Belarus and Poland exhibited the lowest abandonment rates (10% and 16%, respectively), yet for very different reasons. Belarus retained most of its agricultural land under production by preserving the large-scale farming structures of socialist times with high state subsidies for agriculture. Poland experienced comparatively few changes in farm structures in the transitional period, because the agriculture sector during socialism was characterized by a coexistence of many small-scale private farms and few state farms, whose land was sold after socialisms.

Hence, socialist legacies combined with postsocialist government support for agriculture was crucial for abandonment trajectories. The importance of institutional changes and land reform strategies is impressively visible along country boundaries, such as between Belarus and Russia (see figure 1 and 2). Analyzing the patterns and drivers of such differences is vital to better understand how the untapped production potentials on unused agricultural land in the region can be harnessed. 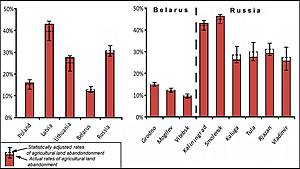 Figure 2. Agricultural land abandonment rates ((A): by country; (B): separately for Belarus and Russia by provinces). Prishchepov et al. 2012.

“Institutional changes that regulate land use are not rare", says Prishchepov. Official statistics suggests that some agricultural fields that were abandoned within the last decade were recultivated in Latvia, Lithuania and Poland, which was likely due to completed land reforms, but also likely due to Common Agricultural Policy (CAP) subsidies. At the same time in Belarus and in the part of Russia that was studied, agricultural land abandonment rates increased, which was likely due to incomplete land reforms. It was found that in Russia more than 50 million hectares of arable land is currently abandoned. “Eastern Europe and Former Soviet Union countries hold a great promise for environmental conservation, but also to increase future agricultural production, because large tracts of unused lands coincide with frequent low yield levels", concludes Prishchepov.

The Leibniz Institute of Agricultural Development in Central and Eastern Europe (IAMO) analyses economic, social and political processes of change in the agricultural and food sector, and in rural areas. The geographic focus covers the enlarging EU, transition regions of Central, Eastern and South Eastern Europe, as well as Central and Eastern Asia. IAMO is making a contribution towards enhancing understanding of institutional, structural and technological changes. Moreover, IAMO is studying the resulting impacts on the agricultural and food sector as well as the living conditions of rural populations. The outcomes of our work are used to derive and analyse strategies and options for enterprises, agricultural markets and politics. Since its foundation in 1994, IAMO has been part of the Leibniz Association, a German community of independent research institutes.