14 November 2017 - On 14 November 2017, the German-Ukrainian Agricultural Policy Dialogue (APD) will host a discussion event at Agritechnica in Hanover, Germany, in co-operation with the German Agribusiness Alliance of the Committee on Eastern European Economic Relations (OA), the DLG e.V. and the Leibniz Institute of Agricultural Development in Transition Economies (IAMO).

Within the scope of the EU-Ukraine Association Agreement, the Ukrainian government has already made remarkable progress, particularly in the agricultural sector. Crop production has shown stable development trends and Ukraine has become a leading exporter of agricultural commodities.

At the same time, key reform projects remain on the agenda. Focal issues here are, for example, public land administration, the facilitation of efficient farming structures, and the introduction of EU quality and safety standards. Long-term, reliable institutional framework conditions in these and other key areas of agricultural policy encourage investment and contribute to the further expansion of international trade.

The contribution of Ukrainian and international agribusiness to the implementation of these reform projects is of vital importance. At the event, representatives from the Ukrainian agricultural sector will share their visions for the sustainable development of agriculture in Ukraine and provide suggestions for stimulating further bilateral co-operation. These issues will be addressed in greater depth in a subsequent panel discussion.

The admission ticket to Agritechnica entitles visitors to participate in this event. For organisational reasons, prior registration via the APD (info(at)apd-ukraine.de) is requested until 10 November 2017. The event will feature simultaneous interpretation (German/Ukrainian). 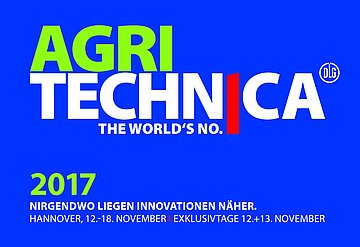